The recent blog post, Access Relational Databases Anywhere with StreamSets Cloud and SSH Tunnel, presented an overview of StreamSets Cloud’s SSH tunnel feature. In this article, aimed at IT professionals who might have to configure an SSH tunnel, I’ll look a little more deeply into SSH tunneling, and explain how I configured my home router and SSH server to allow StreamSets Cloud access to PostgreSQL running on my laptop on my home network.

SSH tunneling is supported by all of the relational database stages currently available in StreamSets Cloud:

Here’s a simple example – the bastion host is located in a DMZ, between two firewalls. Clients on the Internet can access the bastion host via SSH on port 22; all other ports are blocked by the outer firewall. The inner firewall allows traffic to one or more internal services, such as a database, via a limited set of ports. There is no direct access from the Internet to the private network.

The SSH server on the bastion host must be configured with each client’s SSH public key. The public key is used to authenticate access to the SSH service; only clients with the corresponding private key can set up an SSH Tunnel.

With this in hand, a user can configure their data pipeline. In the relevant pipeline stage, they will select the ‘SSH Tunnel’ tab and enable ‘Use SSH Tunneling’. The user will enter the above parameters, clicking ‘Show Advanced Options’ if necessary to set the port and/or host fingerprint, and download the SSH public key.

With that done, the user can proceed to configure the pipeline stage with the connection string, query, credentials etc, use preview to verify the connection and see the first few rows of data, and run the pipeline to read data from, or write data to, the database.

I was keen to try out SSH tunneling with the minimum number of steps, and I realized that I could allow StreamSets Cloud to query the PostgreSQL database running on my laptop, at home. I’ll walk through the steps I took to achieve this, so you can play along at home. Note that a real enterprise data center will have very different practices and procedures!

My network architecture is a little simpler than the example above – I don’t have a DMZ, and I simply run the SSH server and database on my laptop:

My first step was to configure my router to forward traffic on port 22 to my laptop:

I then created a simple pipeline with a PostgreSQL Query Consumer:

Following the StreamSets Cloud documentation for SSH tunnel, I generated the host fingerprint on my laptop:

Now I could fill out the SSH Tunnel tab on the PostgreSQL origin. Note that I enabled ‘Show Advanced Options’ to configure the host fingerprint.

Looking at each configuration property in turn:

Next I downloaded the SSH public key file to my laptop and installed it. Again, I following the StreamSets Cloud documentation:

Before I could test it out, I needed to configure the PostgreSQL Query Consumer with a JDBC connection string, query etc:

I configured a simple incremental query to retrieve rows based on a primary key, so I could add data as the pipeline was running and see it being processed in near real-time.

Note that the hostname in the connection string is internal to my home network. Remember, my laptop is not directly exposed to the Internet; the SSH server, running inside the local network, makes the connection, so the hostname need only be locally resolvable.

Without a doubt, my favorite StreamSets Cloud feature is preview. I can preview even a partial pipeline, comprising just an origin, to check its configuration and see the first few records from the data source. Previewing my embryonic pipeline showed that StreamSets Cloud could indeed read data from my laptop, located on my home network, via SSH tunnel: 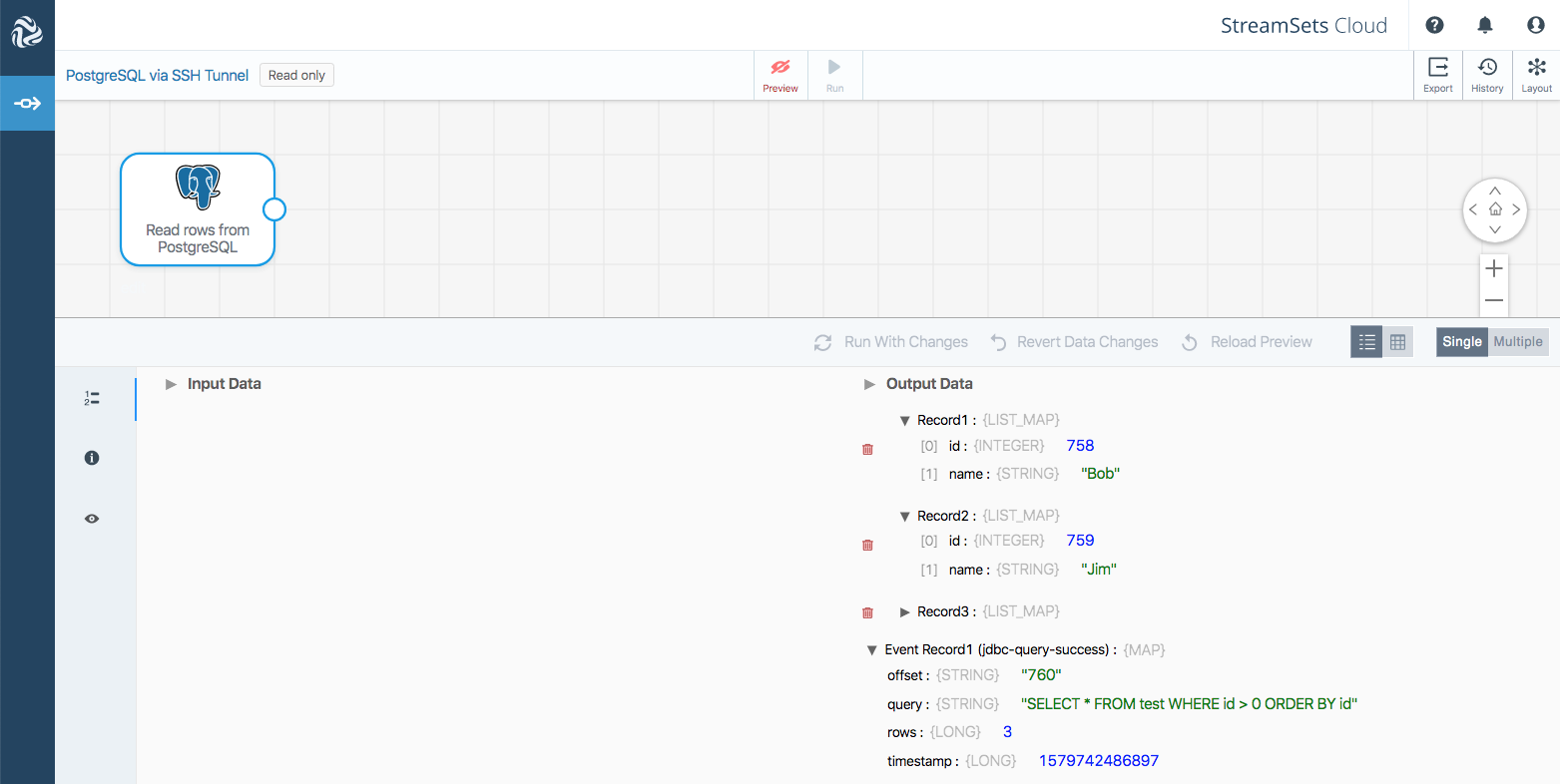 Now that I can read data successfully, I need to send it somewhere! For the purposes of this demo, I selected Amazon Kinesis.

StreamSets Cloud’s Kinesis Producer sends messages to a Kinesis stream, and I can easily run a command-line tool to consume and display messages to verify that the pipeline is operating correctly. The blog entry Creating Dataflow Pipelines with Amazon Kinesis explains how to build data pipelines to send data to and receive data from Kinesis Data Streams in the context of StreamSets Data Collector; StreamSets Cloud’s Kinesis stages work in exactly the same way.

I could now run the pipeline to see data being streamed from PostgreSQL to Kinesis: 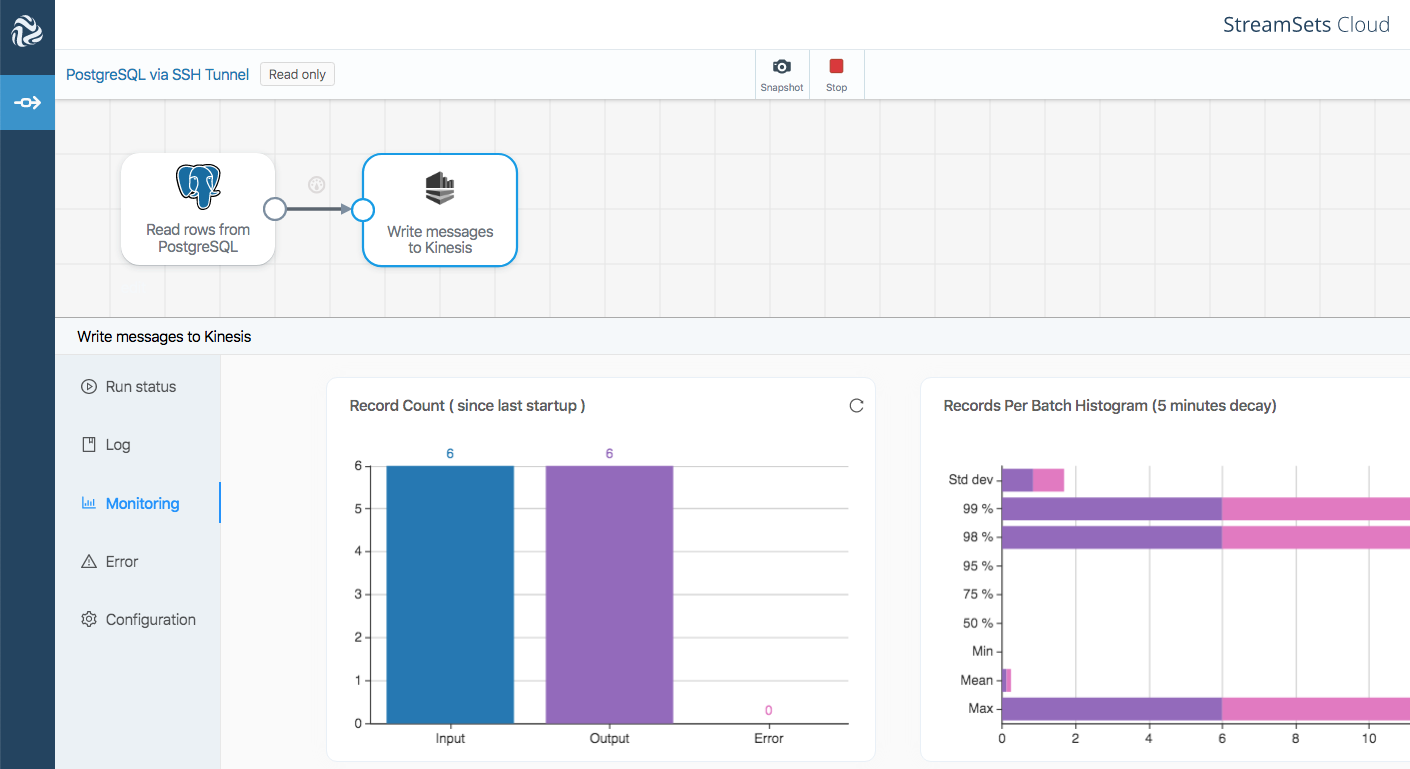 Using the aws command line tool and a bit of shell magic to read the Kinesis stream:

This short video shows the pipeline in action: