This post describes how StreamSets Data Collector, a fast and flexible data ingestion engine, can be configured to take advantage of IAM Roles when running on AWS Elastic Kubernetes Service (EKS). IAM Roles allow data engineers to concentrate on business logic while AWS permissions are managed independently by AWS Administrators in accordance with AWS Best Practices for Security. If Data Collector is deployed directly on an EC2 instance, IAM Roles can simply be bound to the instance, but when running Data Collector on EKS, additional steps are needed.

The preferred way to make IAM Roles available to Data Collector running on EKS is to use IAM Roles for Service Accounts (IRSA). Alternate approaches include assigning IAM Roles directly to EKS nodes, which is undesirable as the IAM Roles would be available to all Pods running on the node, or using kube2iam which requires additional deployment and networking setup. This post covers IRSA.

Here is a high-level overview of the steps for implementing IRSA for Data Collector Deployments on EKS (details of each step are provided below):

With those steps in place, Data Collector pipelines will have the AWS Permissions granted by the IAM Role.

Step 2: Create an OIDC Identity Provider for your EKS Cluster

Follow these steps to create an OIDC identity provider for your EKS cluster.

Create an IAM Role for the sdc Service Account that trusts the EKS Cluster’s OIDC Identity Provider and the sts.amazon.com audience as described here.

Here is an example of creating this IAM Role: 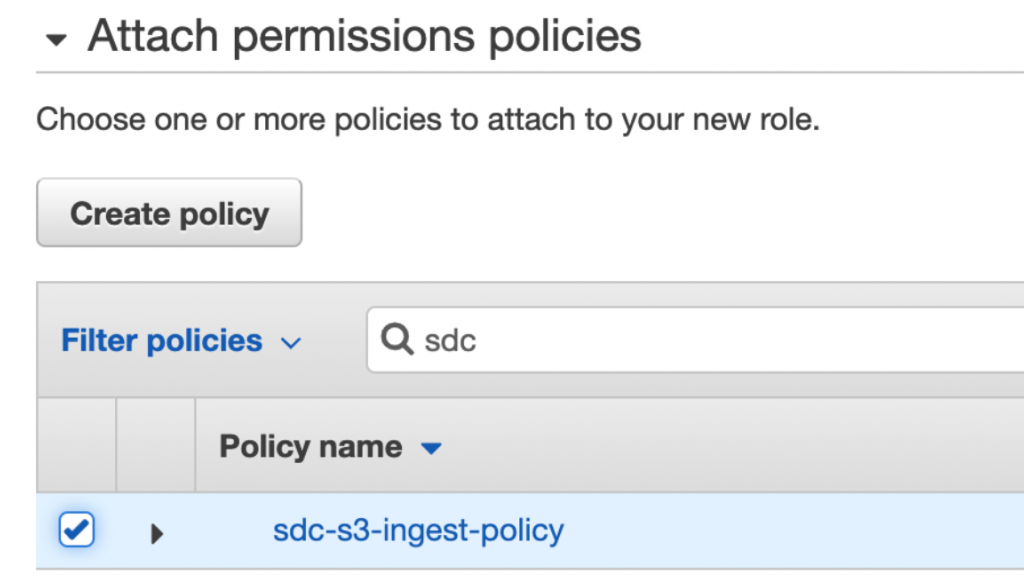 Save the Role with a name like sdc (the name is not critical). Then, after the Role has been created, edit the Role’s trust relationship as described in step 11 in the IAM Role section on this page, making these changes:

Step 5: Attach the IAM Role to the Service Account

Attach the IAM Role to the sdc Service Account as described here, specifying your AWS Account ID and the IAM Role name, using a command like this:

Use Control Hub to create a Deployment for a Data Collector instance with a manifest like the example shown below. The Deployment manifest should specify the following:

The Control Hub Deployment should specify a DataCollector Label like eks-iam (the Label is not critical).

Here is an example manifest for use with a Data Collector image that includes the AWS stage library.

Start the Deployment and the new Data Collector should register with Control Hub:

Confirm that Data Collector has the IAM Role

To confirm SDC has the AWS permissions granted by the IAM Role, create a Pipeline for the newly registered Data Collector that writes to the relevant S3 bucket. I’ll use a simple Pipeline like this:

Configure the S3 Destination to use “Instance Profile” as its authentication method (which will access the IAM Role) and to write to a folder within the chosen bucket: 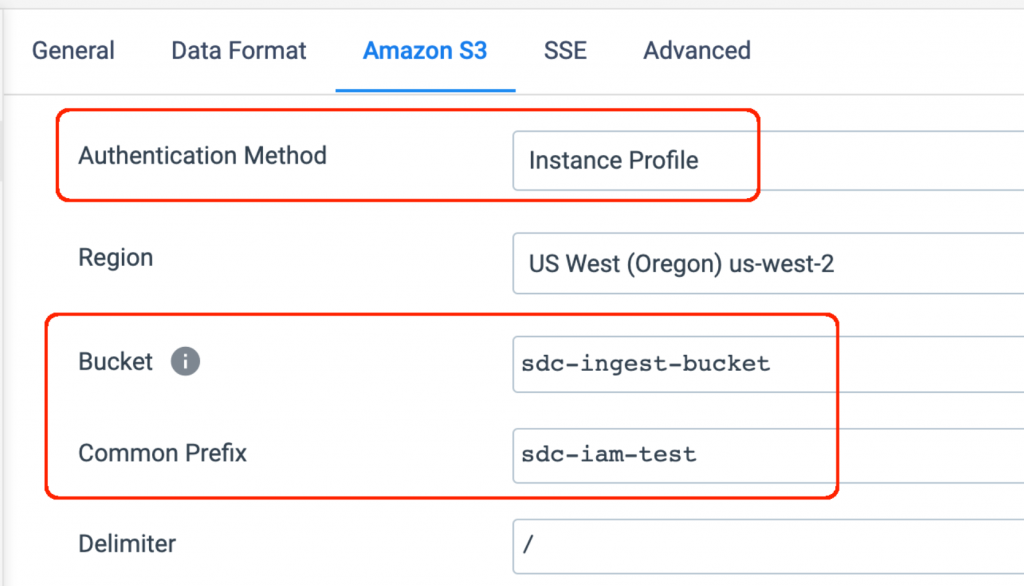 Create a Job for the Pipeline with the Data Collector Label eks-iam so it will run on the newly deployed Data Collector. Start the Job and view its metrics to confirm it is writing to S3: 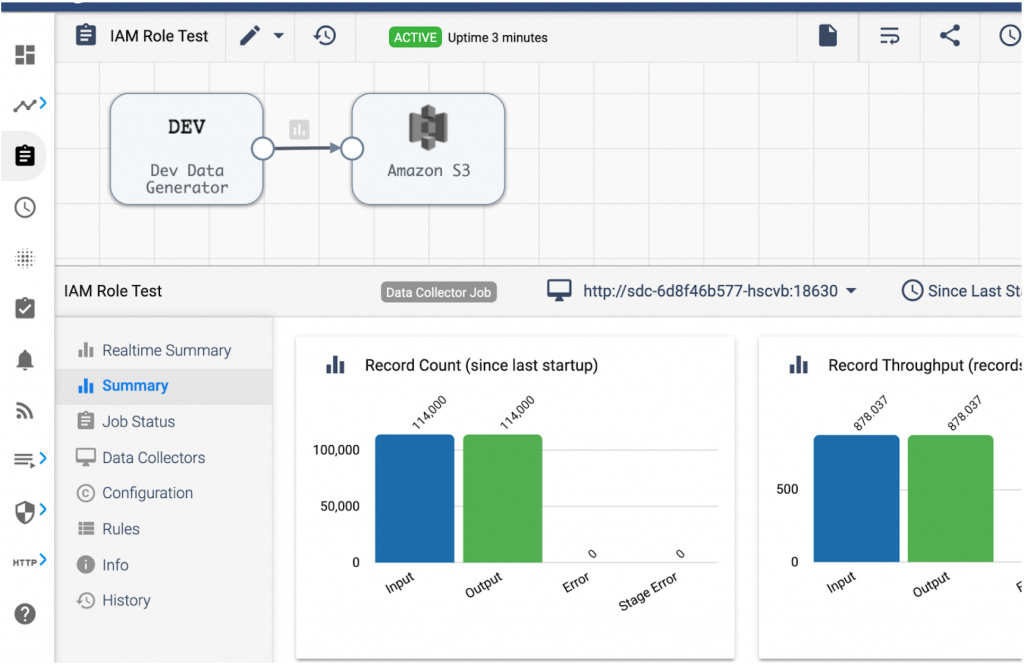 Confirm that data has been added to the S3 Bucket

We can see data has been written to our S3 bucket: 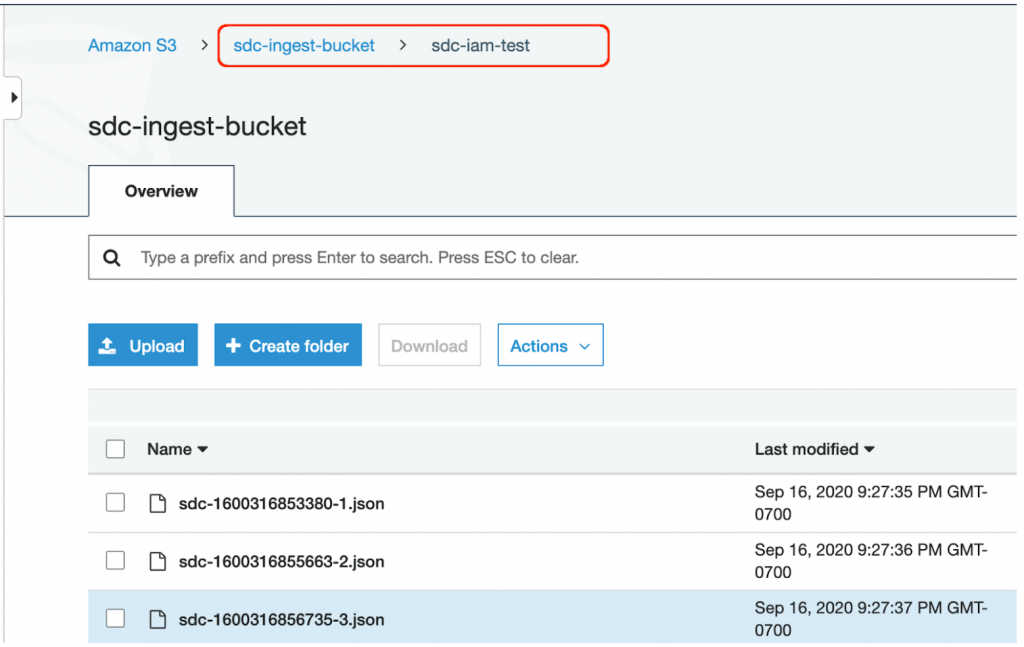 This post showed how to take advantage of IAM Roles when deploying Data Collector on AWS Elastic Kubernetes Service. With simple administrative configuration in both AWS and StreamSets, it is easy to manage fine-grained AWS permissions for Data Collector pipelines in accordance with AWS Best Practices for Security.

If you are running Data Collector on EKS, give this technique a try and let us know how it works for you!

You may also be interested in earlier posts about StreamSets and Kubernetes: