In this post, we will take a look at best practices for integrating StreamSets Data Collector Engine (SDC), a fast data ingestion engine, with Kafka, and take a deep dive into the details and show how to send Kafka messages to Amazon S3.

Apache Kafka is a distributed event streaming platform used by thousands of companies for streaming analytics and for other mission-critical applications. This has become one of the most common components of the big data ecosystem within organizations.

In some scenarios an organization may already have an existing data pipeline bringing messages to Kafka. In this case, SDC can take on the role of a consumer and handle all of the logic for taking data from Kafka to wherever it needs to go. For example, you could deliver data from Kafka message to Amazon S3/HDFS/Elasticsearch or whatever destination you choose without writing any code. With the use of StreamSets Kafka origin you can take Kafka messages and batch them together into appropriately sized and push them to desired destination.

Why are there two Kafka origins?

Suppose you have an application that needs to read messages from a Kafka topic, run some validations against them, and write the results to another data store. In this case you will create a consumer pipeline which subscribes to the appropriate topic, and start receiving messages, validating them and writing the results.

This may work well for a while, but what if the rate at which producers write messages to the topic exceeds the rate at which your application can validate them?  If you are limited to a single consumer reading and processing the data, your application may fall further and further behind, unable to keep up with the rate of incoming messages. Obviously, there is a need to scale consumption from topics. Just like multiple producers can write to the same topic, we need to allow multiple consumers to read from the same topic and as well read from multiple topics, splitting the data between them. That’s where Kafka multi-topic consumer origin comes in handy. This origin uses multiple threads to enable parallel processing of data.

Kafka Multi-topic Consumer origin can then take advantage of additional processors and memory to run several consumer threads in parallel. Kafka will distribute messages across the partitions, and the load will be shared between the consumer threads. 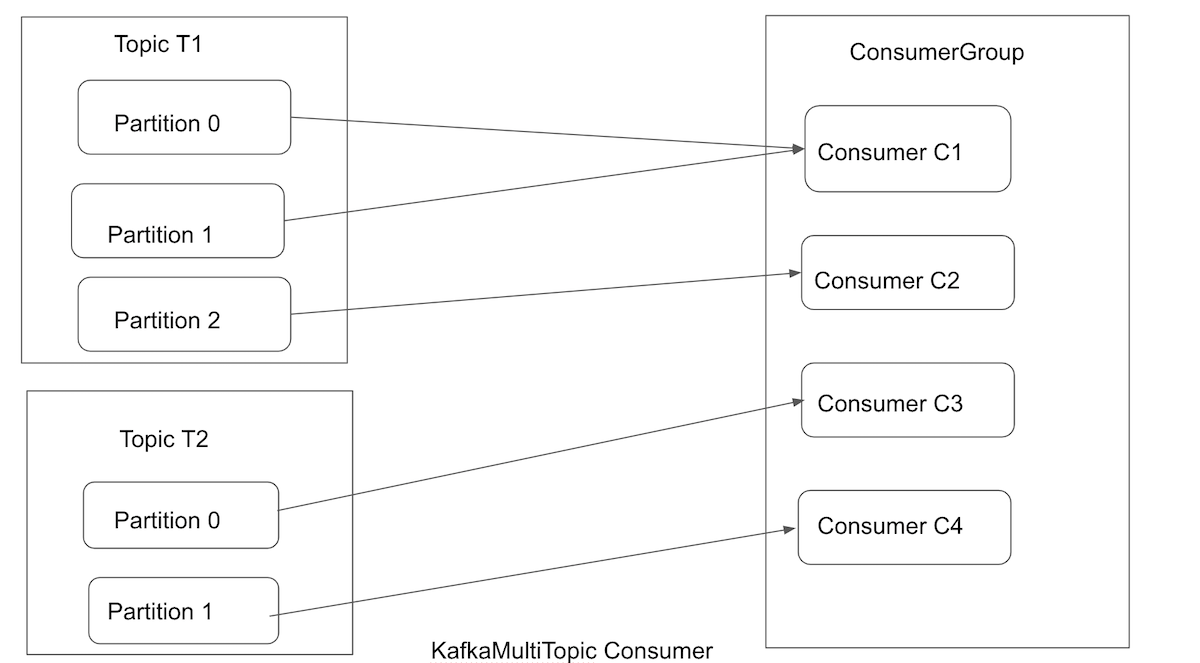 Which one is the right choice for me?

If your SDC engine is running on a more powerful machine which has high resource availability, then use Kafka Multi-topic origin to scale vertically.

However, if you plan to scale horizontally which is a more cost-effective option, then use Kafka consumer again partitioning the Kafka topic, but this time running the pipeline on multiple Data Collector instances. This has some extra overhead of maintenance if you are manually running multiple instances of this pipeline over multiple data collector instances, but this can be achieved easily with StreamSets Control Hub to start multiple pipeline instances through the same job.

Let’s look at some Advanced features which you can leverage in both Kafka origins.

You can configure both Kafka stages – Kafka Consumer and Kafka Multitopic Consumer – to connect securely through the following methods:

You can configure both origins to capture the message keys included in each Kafka message and store them in generated records. Kafka message keys can be string values or Avro messages, depending on how your Kafka system is configured. You can store message key values in a record header/field or both and can use the values in pipeline processing logic or to write them to destination systems. If you have no need for message keys, you can discard them. The Kafka Consumer and Kafka Multi-topic Consumer origins discard message keys by default.

The goal here is to read Avro files from a file system directory and write them to a Kafka topic using the StreamSets Kafka Producer. We’ll then use a second pipeline configured with a Kafka Consumer to read all the messages from that topic, perform a set of transformations to mask the data and determine the type of credit card. And finally send Kafka messages to Amazon S3 by partitioning the data on credit card type and make sure that the data stored on S3 is encrypted. In the second part of this blog, we will redesign our data pipeline for scaling and for handling huge amounts of data running through during your send of Kafka Messages to Amazon.

Here’s what the data in JSON format looks like: 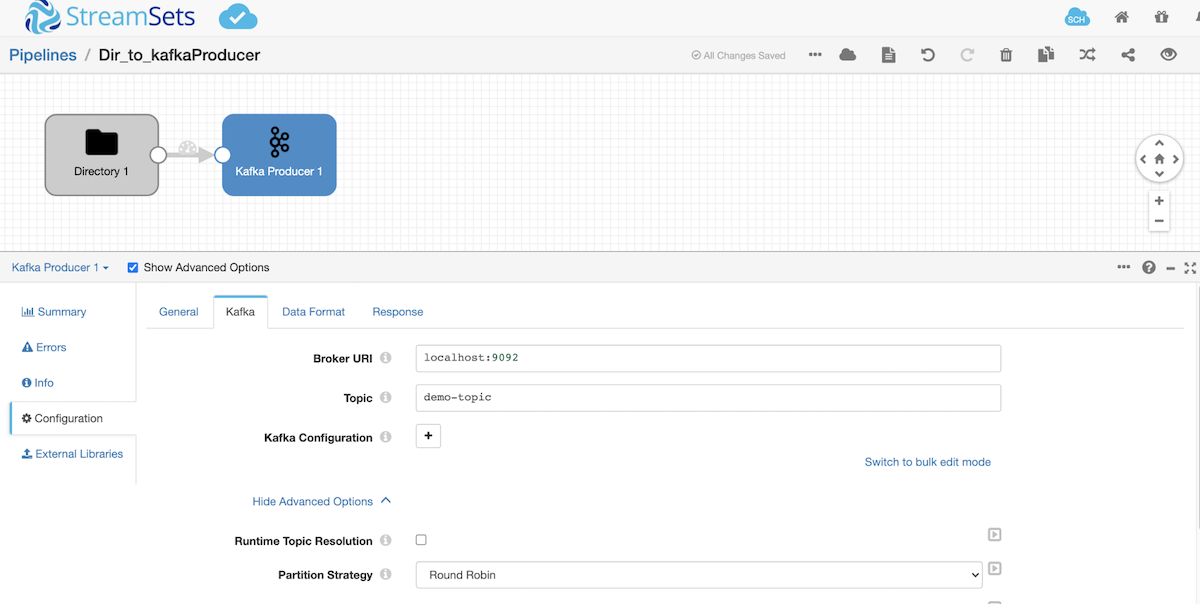 Consume Kafka messages and store them in Amazon S3 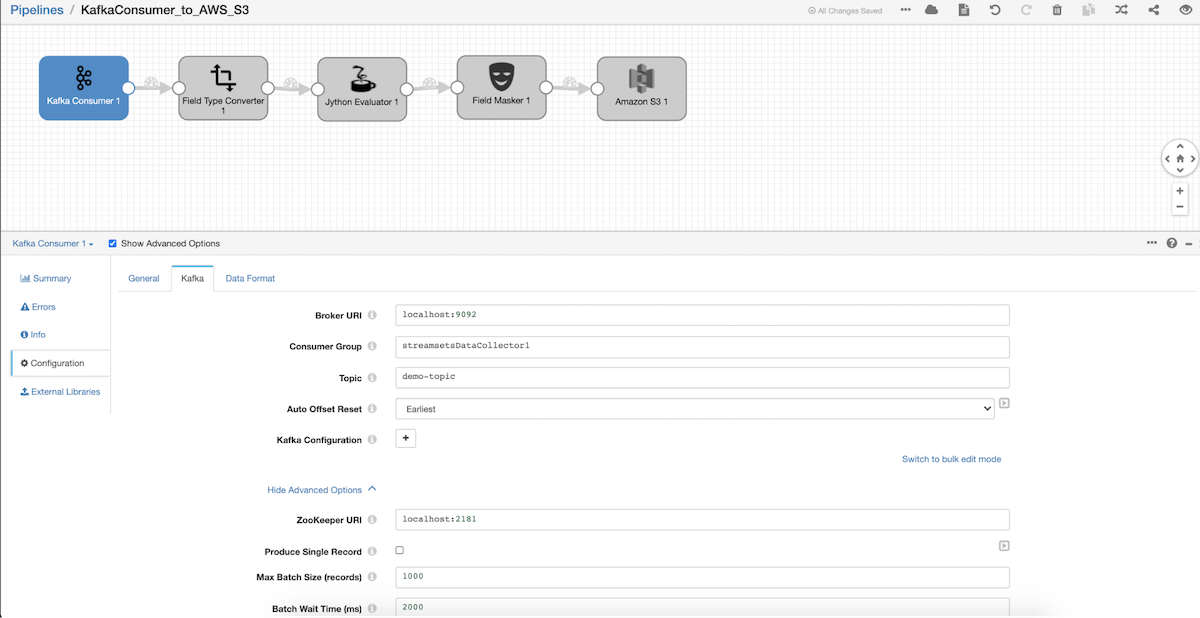 Note that the Output on S3 will be partitioned by ‘credit_card_type’

Now let’s assume you have to scale the above solution given the scenario that you are dealing with large amounts of data and there are multiple upstream applications which are writing to multiple Kafka topics. So the rate at which producers write messages to the topic has exceeded the rate at which this pipeline consumes.

Also assume there is one more upstream pipeline/application which generates the similar credit card data and stores that info in Kafka topic `demo-topic-2`.

So instead of recreating the entire data pipeline from scratch we can easily redesign the existing pipeline by swapping out the origin with Kafka Multitopic Consumer origin. We can scale the pipeline vertically by increasing the number of threads. Simultaneously we can read multiple topics as well if required. 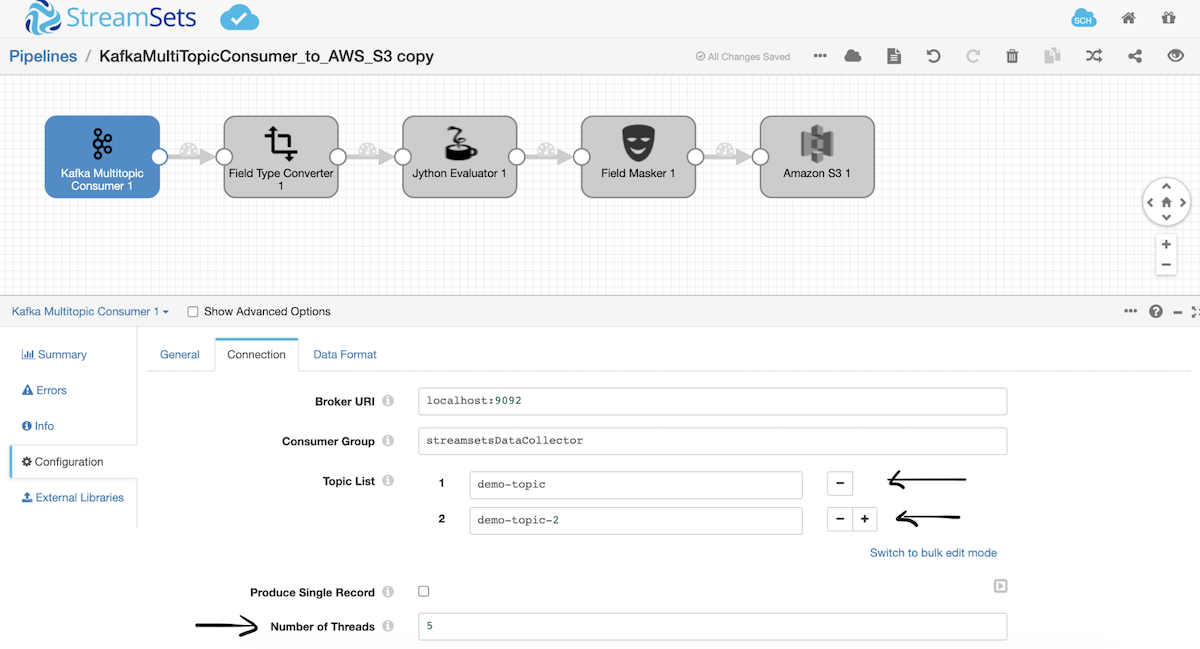 Note: Sample data and pipelines can be found on GitHub.

In this blog, we learned how to use StreamSets as a Kafka consumer and when to choose Kafka Consumer origin vs Kafka Multitopic Consumer origin to process large amounts of Kafka messages and take advantage of parallelism. We also explored various AWS S3 destination capabilities like partitioning and server side encryption.

Here are some resources that will help jump start your journey with designing and deploying data pipelines:

Blog Post
StreamSets Live: Demos with Dash — Your Questions Answered
Back To Top